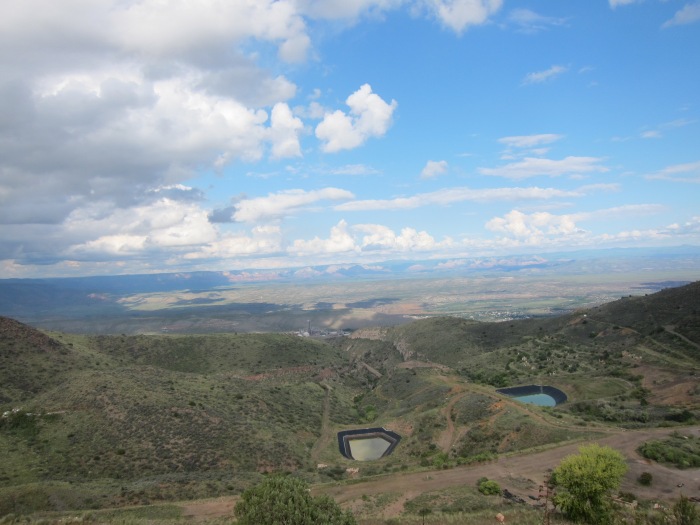 Last year I visited Phoenix, AZ and one of the more memorable day trips was to a little old mining town called Jerome.   Location wise Jerome is Southwest of Sedona and Flagstaff but directly North of Phoenix / Scottsdale.  The drive, like anywhere in the American Southwest, is stunning.  Cactus-lined roads wind up and around mountains trails and bright cerulean skies pop against the rocky terrain.  I’m from the midwest and am used to flat fields as in all directions so to me Arizona is practically another planet.  I’m grateful my hosts drove, allowing me to gape moronically at the striking natural beauty that never seemed to end.

A big J marks the side of the mountain you drive up to find Jerome, I guess this is an old Southwest tradition. While scaling the trail we stopped and pulled over to check out an old car abandoned in a ditch. I’m not skilled in dating old cars but it looked at least 60 years old. This was the first forgotten old thing of many we saw that day.

The actual town of Jerome is just like any other old, rural town in America. Relics of the past are not pristinely kept for the sake of preserving history but rather survive because of a, “if it ain’t broke” mentality. We drove past old saloon and shops, an ice cream parlor, police station… the staples of any small town, and kept on up the hill. At the very top we stopped at one of many local haunts, the Jerome Grand Hotel.

The Hotel has been the big draw since the being featured on an episode of Ghost Hunters or something like that. During it’s past life the hotel served as a hospital for the miners and surrounding town. It was considered a good hospital with modern technology but the death toll is massive, averaging out to at least one per day for the about twenty years it operated. The death count, an the original Otis elevator, and years of rumors have won the hotel a spot on the list of the country’s most haunted places. We asked politely and were given some keys to go exploring. I didn’t get the haunted vibe and none of my mirror pictures had orbs. But I don’t know if I’d want to stay there overnight.

The next stop on our trip was the old ghost town. The town is really just an old junkyard with some buildings and just a few residents. I have no idea what the few people who do live there do other than charge admission to look at an old one-room school house and gas station. We met a man with a little dog who was using a machine to saw logs I think. The dog was friendly but the guys living there were not—there were a lot of threatening signs to back my theory.

Jerome is a memorable and worthwhile trip. The drive from Phoenix is beautiful and the old town is definitely an interesting slice of life in the old Southwest. While the haunted aspect might be a little blown out of proportion but the town is definitely full of antique charm. We didn’t stop for dinner or drinks but there are plenty of places for that, too.

On the wall of the school house

It was a junkyard

The ghost town from afar 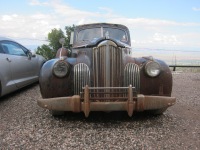 An old car outside the hotel

One Reply to “Jerome, AZ”